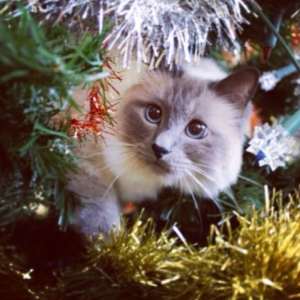 Domestic cats of the future could have more than nine lives, bringing a new meaning to the playful term, ’copycat’. Although the act of cloning a domesticated animal is not a brand-new concept, in fact, the first cat was cloned in 2001 by scientists at the Texas A&M University. However, crazy cat ladies and gentlemen of the Internet may have a reason to rejoice, as new technology is venturing into the business of cloning household cats and dogs for high income customers. The firm behind the idea is ViaGen, a Texas-based biotech company specializing in animal cloning technology, gene banking, and what it calls ‘pet preservation’.

In other words, this translates into a customer being able to reserve their favorite pets genetic makeup as a way to recreate a copy in the future. But this technology comes with a hefty price tag – to clone a cat it costs $25,000 and a dog will set you back $50,000. However, that price is not including fees for consulting, visitation, or for the storage of your pets genetic material. Nonetheless, in the meantime our original fluffy friends will have to do as when the ’product’ will be available to the general public is uncertain.

Aside from cat cloning, other Texas biotech firms are thriving and making impressive strides in innovation. For example, Texas-Based firm ZS Pharma doubled their stock price and boosted the company’s value above $1 billion in the span of a year. Investors are wagering that the FDA will approve the companys debut drug, ZS-9, developed to combat hyperkalemia and control hazardous potassium levels.

Both the ZS Pharma and ViaGen cases illustrate the promise of a growing biotech industry in Texas. New technologies are expediting a biotech boom nationwide and a recent report by EY revealed that U.S. biotech companies raised a record $54.3 billion in capital last year and produced close to $15 billion in profits.

As we mentioned in our article yesterday, Texas is known more as the home to oil titans and the oil and gas industry is huge. However, low oil prices have dented venture capital activity in the energy sector. Despite this, there are still opportunities in the energy sector for savvy investors, for those attracted to private equity or for those who have the capacity to conduct research and development to create innovative solutions.

In contrast, biotech investments in Texas are on the upsurge and the industry is growing. A recent MoneyTree report reveals approximately $225.3 million has been invested in biotech in Texas in 2015 so far. In comparison to the energy sector, which has received just $67.9 million investment this year, the biotech industry is indeed going strong. In fact, there are more than 200 life science firms in North Texas alone, and around 1,200 regional firms engaged in the industry overall.

Certainly, Texas is making impressive developments in technology and the biotech industry is accelerating. Despite the industry traditionally being concentrated in San Francisco or Boston, the Lone Star State is making a name for itself as a region that cultivates innovation. Nonetheless, it is important to note that scientific research and development are critical ingredients for nurturing biotech companies. If you’ve been involved in research and development within the biotech industry, or any other industry, contact us today to find out if you’re eligible for the Research and Development (R&D) Tax Credits.

Virginia Patent of the Month - November 2022

From research to habitat support, ocean aquaculture often requires significant infrastructure that needs to be secured in place. Most organizations use some form of taut-line mooring systems which use tension to hold the vessels in p [...]

Vermont Patent of the Month - November 2022

Omega Optical, LLC specializes in filters for OEM customers around the globe. This pioneer in optical film manufacturing has grown since their foundin [...]