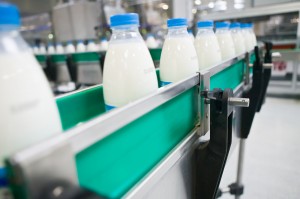 Indeed, the slowing global economy, a still-cautious consumer, rising interest rates, a stronger dollar, and tax and regulatory uncertainty could each pose downside risks to U.S. economic growth. Along those lines, manufacturing production and retail sales numbers have been lower than expected over the past few years, and export sales growth has continued to be sluggish in light of economic challenges abroad.

With that said, manufacturers in the recent National Association of Manufacturers (NAM) Manufacturers’ Outlook Survey remained mostly optimistic. In specific, 61.7% of manufacturers said they had a positive outlook for their company, up from 56.6% in March and 59.6% in December.

On the other hand, the numbers in the report reflect manufacturers’ seemingly overwhelming frustration with regulations and finances. Manufacturers view a corporate tax rate of 25 percent or less, a long-term research and development tax credit, and robust cost-recovery provisions as essential elements of tax reform that would make them more competitive.  In specific, 82.6% of respondents said their company’s total spending on state and federal regulatory compliance had increased over the last few years — with capital investments and expenditures the most likely use of funds if those compliance costs dropped — while 74.3% favored lowering the corporate tax rate to 25%.

Of all of the key indicators, research and development (R&D) remains a key concern for manufacturers in the survey. In specific, more than three-fifths of respondents said they favored making an enhanced research and development incentive permanent, with 55.0% expressing a desire for robust capital cost-recovered provisions as a chief component of comprehensive tax reform.

Nonetheless, the current R&D tax credit remains a frequently overlooked opportunity for manufacturing businesses. Alongside traditional manufacturing, the United States is seeing a rising wave of innovation that has the capacity to transform existing markets and value networks. However, many innovative manufacturing companies are unaware of the potential cash-saving benefits they are eligible for.

In light of this, Swanson Reed, in partnership with Capstan Tax Strategies, recently completed a webinar which covered the basics of claiming the tax credit and cost segregation for the manufacturing industry. View the webinar here, or alternatively, on YouTube at: https://www.youtube.com/watch?v=Zqw6sUXZhPg

Swanson Reed’s R&D tax professionals are available to discuss the R&D tax credit – contact us today if you would like to know if your company qualifies.