In relation to the study, Carolyn Cawley, managing director of the U.S. Chamber of Commerce Foundation, divulges that the findings, “reveal that states invested in the STEM economy are likeliest to thrive.”  Indeed, the report outcomes affirm that the future of our states—and their capability to combat major economic, social and environmental challenges — rests fundamentally on how they utilise and benefit from technology. Cawley further notes, “technology is reshaping established fields of medicine, manufacturing, energy and business services, and shifting the spotlight from Silicon Valley to other corridors of homegrown innovation.”

Certainly, Texas has performed well due to an infrastructure that nurtures education, research, and entrepreneurship. The report highlighted key strengths in the Texas economy, noting that the state has added more jobs than any other state in 2014 alone, and has led the nation in job growth for the fifth consecutive year. Moreover, the study revealed that Texas companies, universities, and research institutions are national and global leaders in research and development in many industries, including electronics, medical, biotechnology, aerospace, advanced materials, and energy.

From this study, one can see the effect innovation can have on industrious states. In the Enterprising States: States Innovate overview, the author notes that “innovation drives economic growth. This is one of the most consistent findings in macroeconomics, and it’s been true for centuries.” In addition, economists have calculated that approximately 50% of U.S. annual GDP growth is attributed to increases in innovation. 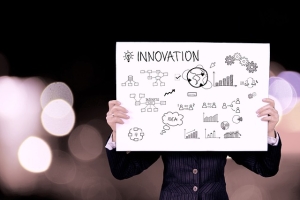 However, how do companies create this innovation to drive economic growth? Both economic theory and empirical analysis emphasize the vital position of R&D in economic growth. R&D, which may take the structure of basic research, applied research or experimental development, encompasses “creative work undertaken on a systematic basis to increase the stock of knowledge… and the use of this stock of knowledge to devise new applications” (OECD, 1994). Ultimately, R&D produces technology to boost economic growth, address societal concerns such as health and environment issues, and improve living standards. Overall, as the Enterprising States: States Innovate study highlighted, the prosperity of America’s states rests largely on how they adapt to and take advantage of changes in technology. Given the benefits of a technological economy outlined in the previous paragraphs, it is clear to see that investing in R&D is a way of spurring economic growth and taking advantage of the opportunities technology has made available.

Hence, due the contribution of R&D to productivity growth, economic performance and the achievement of social objectives, governments do have a role in encouraging the appropriate R&D levels and expenditures. In the United States, companies are granted R&D tax credits, which are tax incentives for performing qualified research (not necessarily successful) in the U.S., resulting in a credit to a tax return. If you want to learn more about R&D tax credits, contact a Swanson Reed specialist today for further information.